Fresh Falafel Yo! from Israel 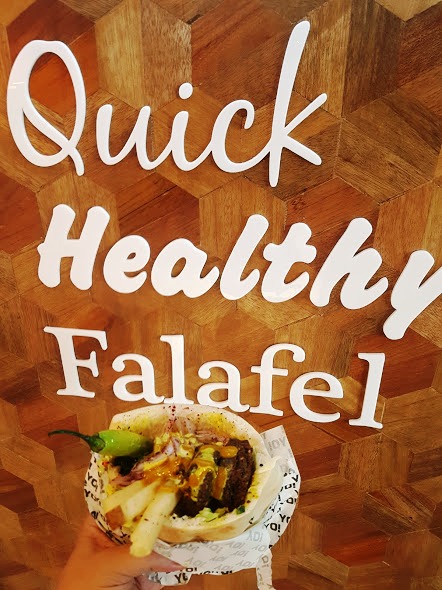 Falafel is a traditional streetfood Israeli cuisine and considered to be the national dish of the country made with mashed chickpeas (or garbanzo beans), parsley, coriander, garlic, and other Mediterranean spices.

When my brother arrived from Middle East, it was also our way to get the family together.

Yes, an early, early flight but what made us also excited when we were meeting him, he will be bringing with him authentic Falafel where we can eat it in the vehicle as our breakfast.

He told us to eat it fast to avoid being saggy which I find it still fresh to indulge despite the long flight.

When we were invited for the opening of Falafel Yo! in Greenbelt 3, even that was only the activity that I will be going in the metro, I make time.

So here it is:

Compared to what I craving with my brother’s Falafel, did I find it authentic?

More fresh yet healthy and delicious because it’s done while waiting for your order.

To those who do not have any idea with Falafel, here it is:

It’s a traditional streetfood Israeli cuisine and considered to be the national dish of the country stuffed in a chewy pita with mashed chickpeas (or garbanzo beans), parsley, coriander, garlic, and other Mediterranean spices.

With 6 deep-fried falafel balls stuffed in a chewy pita bread lined with different vegetables, it’s a healthy and filling meal.

Smaller version of the Yo made specifically for kids that also makes for a quick snack. It comes with fries and no chili.

Veers away from tradition in that it combines beef and chickpeas for the falafel balls.

Be sure to add homemade dips to go with their sandwiches – the amba, a sour yellow sauce made of mango, cumin, and turmeric. While tahini, which is a mix of sesame seeds, coriander, and parsley.

Compare to chips, this is more a good choice together with their Lemongrass Juice.

There is a look out for more branches in the future targeting SM City North EDSA Annex and Vertis North as possible locations.

Learn more about Falafel Yo! at www.facebook.com/FalafelYo/